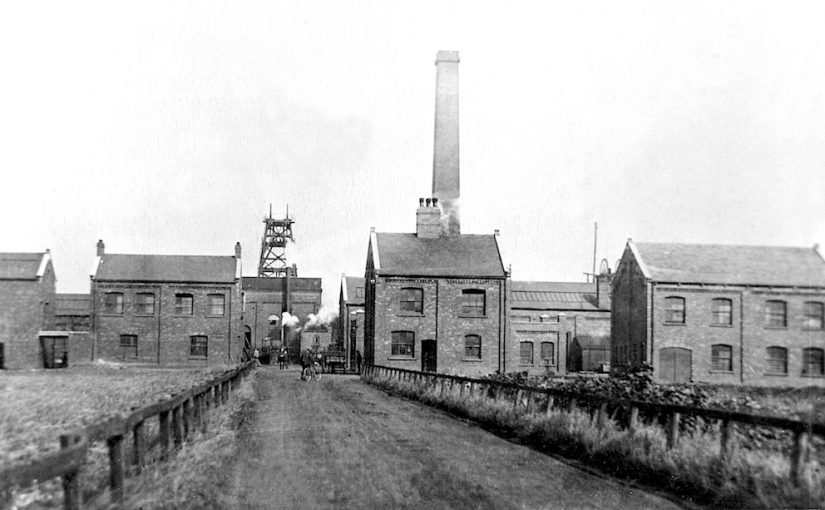 A short stretch of roadway with some rusting iron fence posts just off Fleet Lane in Woodlesford is all that survives of Water Haigh colliery. Compared to others in the area the pit was a relatively new one as its two main shafts were only sunk to the Silkstone and Beeston seams several years before the First World War.

Coal was mined for about 60 years before closure in 1970 when the National Coal Board deemed it had run out of economically viable reserves. Before nationalisation in 1947 it was owned by Henry Briggs, Son and Company Ltd. Throughout its life the coal was carried away on the Aire and Calder Navigation, by railway, and by lorry.

The sinking of two deep shafts at Water Haigh began in 1908 when rights to mine the coal under land mainly owned by the Calverley family of Oulton Hall were acquired by the Briggs company. It was a long established firm which had been engaged in mining since the early 19th century, with pits at Methley, Whitwood and Normanton.

Indeed Water Haigh was a relative newcomer on the local mining scene and had a relatively short life. Fanny Pit at Rothwell, owned by J. & J. Charlesworth opened in 1867 and outlived its neighbour at Woodlesford by 13 years.

Glyn Edwards, who started as an apprentice mine surveyor at Water Haigh in 1956, believed that before 1908 there were already two shallower shafts on the site which Charlesworth’s Newmarket colliery had been using to extract coal from the Haigh Moor seam. In time they became disused and were known as No 2 and No 4 shafts.

In 1910 the sinking of No 1 shaft had been progressing well and had reached a depth of 110 yards. Then on the morning Saturday May 7th the sides of the shaft collapsed and five of the workmen were buried and killed instantly under tons of rock and earth. Frantic attempts were made to save a trapped man but he too died later that day. Several of the rescuers were awarded with medals for their bravery.

The first coal to be cut from the Silkstone seam reached the surface up No 1 shaft on 20 April 1911. From then until its closure in 1970 Water Haigh produced millions of tons of coal. Up until the collieries were nationalised in 1947 the conditions underground were harsh. Many of the seams were only a few feet high. Machines were used to undercut about a foot of coal at the bottom of a seam and then explosives brought down the rest. Often the miners had to lie on their side and use picks and shovels to load the coal into steel tubs.

Boys went down the pit at the age of 14. Their first job was to mind the large wooden doors controlling ventilation in the underground roadways called gates. They progressed to look after the pit ponies which pulled the tubs on rails to the pit bottom.  There the tubs were put in double decker cages to be hauled by stationary steam engines to the top of the shafts.

Notebooks kept by the colliery’s official weighman, Ernest Rogers, and the enginewright, Bill Tate, record the colliery’s output and significant dates in it’s existence going back to before the First World War. For instance the first strike for a minimum wage lasted for 6 weeks in March and April 1912. The men were out for even longer after the war – 13 weeks in 1921, and then during the epic struggle following the General Strike of 1926 when a total of 181 days were lost from May to November.

Roof falls in the workings were common and miners were often trapped under heavy rocks, their mates having to use brute force to free them. The largest single number of deaths after 1910 was in July 1933 when three miners lost their lives in an explosion of methane gas. Three others were badly injured. In 1956 the manager, Billy Williams, who had worked there since he was a boy, and a collier called Waclow Chrystyn, were awarded the George Medal for their efforts to rescue two men. Charles Gibbons received the British Empire Medal.

At the end of its life Water Haigh was in a way the victim of its own success. After the Second World War and nationalisation in 1947 the miners were exhorted to work harder and produce more coal to put the country back on its feet. Larger coal cutting machines were brought in and conveyor belts were installed instead of the old tub system to haul the coal out. Some of the faces were as far away as Ouzlewell Green, and at its peak over a thousand men were employed.  A consultative committee met regularly with elected representatives from the workforce agreeing plans with the management, although its clear from their minutes that Billy Williams remained firmly in charge until his promotion to Group Manager at Glasshoughton in 1958.

Output increased steadily and production records were broken but then in the late 1960s it was becoming obvious that the main Beeston and Eleven Yard seams were becoming exhausted and the cost of developing new ones was prohibitive. It was a problem that was widespread and wasn’t helped by an unofficial strike in October 1969 when all of Yorkshire’s pits ground to a halt for the first time since 1926. The men were striking over pay rates for surface workers just as the Central Electricity Generating Board was making a decision about the new Drax power station.

According to documents in the National Archives local management were sensitive about announcing closure during the strike, especially since that of nearby Primrose Hill pit at Swillington had already been announced. By then Water Haigh had a workforce of about 630 and there was pressure for closure from further up the chain at Divisional Headquarters in Doncaster as the much more profitable pits being developed at Kellingley and elsewhere were short of men. Those over 60 were eligible for decent redundancy payments and pensions.

Closure was announced to a joint meeting of union representatives on December 5th 1969. A last ditch attempt to save the colliery was made by the national secretary of the National Union of Mineworkers, Lawrence Daly. He claimed that correct “jeopardy”  procedures hadn’t been followed. At a meeting with the N.C.B. top brass at their headquarters at Hobart House in London on February 17th 1970 he only managed a two month reprieve and closure was set for the end of April.

So, after a great deal of blood, sweat and toil, accident and death, but also much laughter and camaraderie, coal production at Water Haigh came to an end on April 24th 1970. Hardly noticed by the outside world at the time it was the beginning of the end of a way of life in Woodlesford and the rest of the Rothwell district that has now gone forever.

Click on the link below to listen to Frank Benson and Ken Watson, who were both colliery clerks, remember their working life at Water Haigh.

This page is one of several chronicling the industrial history of Woodlesford. If you have information or memories to pass on to future generations please email me at bensoh10@WoodlesfordStation.co.uk or you can write to 7 Bangor Close, Northolt UB5 4HD, tel: 07711 631 753.

REFERENCES: Adventures In Coal, British Mining British No 66 by John Goodchild. The Rothwell Times. Documents in The National Archives, Kew.