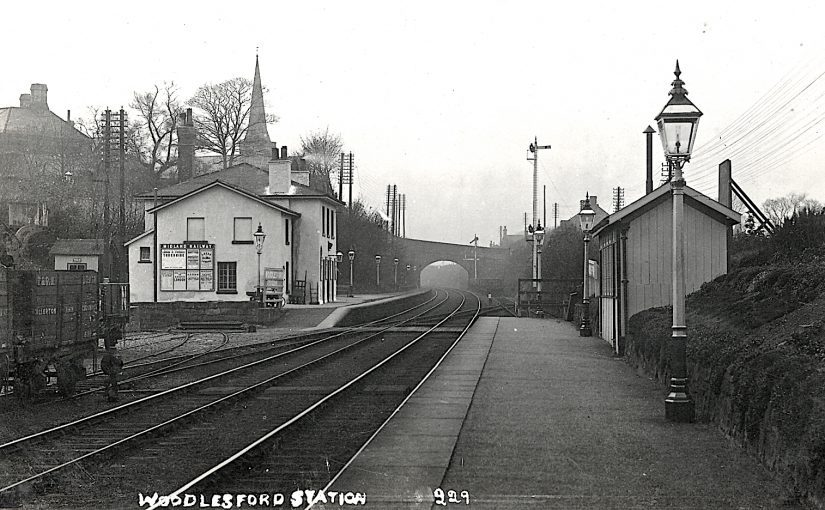 The line through Woodlesford, originally named the North Midland Railway, was one of the first major trunk routes to be built, largely because of the vision and enterprise of the famous engineer George Stephenson. Following his success with the Stockton and Darlington line, opened in 1825, and the Liverpool and Manchester, which ran its first trains five years later, George and his son Robert were instrumental in most of the major railway projects in the next quarter century.

The Stephensons, along with their assistant, Frederick Swanwick, surveyed the route from Leeds through Rothwell Haigh and Woodlesford and onwards to Methley, Altofts and Normanton in the early years of the 1830s. Their plans for the line were deposited with the West Riding authorities at Wakefield in November 1835. It’s likely that they would have lodged locally, possibly at the old Boot and Shoe Inn in Woodlesford which was close to the canal.

It has been suggested the North Midland Railway deliberately bypassed the town of Rothwell even though it was larger than Woodlesford. This wasn’t the case as the route was chosen by Stephenson to be as flat as possible because the steam engines he was designing couldn’t climb gradients very easily whilst pulling heavy loads. So, leaving Leeds, he stuck as closely as possible to the course of the River Aire and then turned into the valley of the River Calder just after Methley. To have routed the line nearer to Rothwell would have meant steeper inclines and the building of expensive tunnels.

Construction of the line, which ran for 72.5 miles as far as Derby, started in 1837. According to contemporary reports up to 10,000 men were employed and the final cost was 3 million pounds. Other lines built at roughly the same time connected the North Midland to York, Manchester, Birmingham and London.

The first trains through Woodlesford ran in the summer of 1840. What a sight it must have been on Tuesday 30 June for the local people to witness the grand opening train of 34 carriages hauled by two engines as it passed through at about 8.30 am on its way to Derby. It returned that evening and a party was held at the Music Hall in Leeds.

In the early years of railways accidents were not uncommon and the Woodlesford district had its fair share. One newspaper describes how a drunken third class passenger travelling in an open truck fell out at the station and was killed by a train travelling in the opposite direction. Another account from 1850 describes how a train from Derby ran into the back of an excursion returning to Leeds from Doncaster races. It was foggy and the stationmaster, John Hugh Mowatt, got the blame for not setting his signals properly.

John Hugh Mowatt is recorded as being at Woodlesford as early as December 1844 and more details about him have come from John Dixon from Pembrokeshire who was researching his family’s history. He came across this website, and got in touch to report that John Hugh held the job until his death in 1856. He was born in Grenada in the Caribbean and served as a soldier in the 5th Dragoon Guards before retiring from the army as a Chelsea pensioner. Mowatt’s first wife died in the station house at Woodlesford and he remarried Mary Wright, the daughter of a ticket collector.

Postcard photographs from before the First World War show a carriage which overshot the buffers in the station yard. It ended up hanging precariously over Aberford Road blocking traffic under the railway bridge. It happened in 1910 and the photos show a large crowd gathered to watch the recovery operation.

Some of the earliest recorded memories of Woodlesford station came from Cyril Roberts of Swillington who passed away in January 2008 aged 82. His father was the stationmaster for about ten years from 1929 after moving his family from Wales. Cyril remembered helping porters to load locally made paint and rope into wagons in a wooden goods shed in the station yard. Cattle from Ireland were also unloaded for local farmers, and barrels of beer in open topped wagons were despatched  from the sidings at Bentley’s Yorkshire Brewery on the daily goods pick up train.

A pipe smoking local character was Bill Tiffany, a signalman for many years at Waterloo sidings signal box about a mile up the line towards Leeds. Waterloo was a lonely place to work, especially at night, and it could only be reached by a dangerous walk along the line from the station. Bill who lived at Highfield Crescent is reputed to have worn footholds in the sandstone wall as he took a daily shortcut down the embankment on his way to start his shift. In the 1960s he took colour photographs which show steam hauled expresses thundering past Waterloo.

David Johnson, who died in 2016, lived all his life in Eshald Place in Woodlesford apart from the years he did National Service in the Kings Own Yorkshire Light Infantry. His interest in railways started when he was a boy and he remembered summer mornings cycling all the way to Garforth to get the number of the engine on a Newcastle to Liverpool express before rushing back just to see the 8.39 am Sheffield to Leeds steam hauled stopper at Woodlesford.

David went on to become a railway clerk in 1955, starting in the goods office at Robin Hood before moving to Woodlesford where he worked on and off through until 1970. His many happy memories included local pigeon fanciers sending their birds off for long distance races; Jack and Jake Gibbs – clog wearing delivery drivers who graduated from horses to lorries; the Ritz cinema manager who used to catch the last train home to Normanton; and the platelayers who used to finish their shift with a free pint of beer at the brewery!

Below are the names of a number of staff who worked on the line from Methley to Waterloo sidings. If you have a connection, or even just a memory of those on the list please use the contact details at the bottom of this page.

The names Joe Harrison and Arthur Holmes have also been mentioned.

Another name which crops up is Thomas C Mander. He was the Goods Manager of the East and West Yorkshire Union Railways which ran through Rothwell. His telephone number in 1900 was No 1, Rothwell.

Please also send information relating to Water Haigh colliery, Bentley’s brewery, and the Armitage company which had quarries and made bricks in Woodlesford.