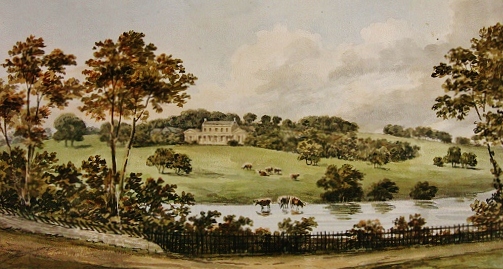 On Tuesday night, about half-past seven o’clock, a fire occurred in the mansion of John Blayds, Esq., Oulton.

The conflagration broke out in the roof of a wing behind the principal building, on which some plumbers had been making repairs in the course of the day. Immediately after the fire was discovered a messenger on horseback was despatched to Leeds for the engines, and reached the town at quarter past eight o’clock.

The fire engines kept in Leeds were sent off with as little loss of time as possible. The engine belonging the Sun fire office arrived at Mr. Blayds’ residence first, and the other engines followed in succession.

The flames, however, had made such progress that when the first engine got to the spot that part of the building in which the fire commenced was entirely destroyed, with the exception of the bare walls; and under these circumstances the firemen turned their attention to the preservation of the main building.

It is supposed the entire damage will be somewhere about £1,500. We understand that the property is amply insured in the Leeds and Yorkshire office.

It is supposed that the fire originated from some ashes or other burning material having fallen into some crevices of the roof while the plumbers were at work, as they had a grate containing fire upon the roof all the previous day. Mr. James, superintendent the Leeds police, was present at the fire, with a number of policemen, who were very efficient in preserving order. Mr. Blayds and family are at present on the continent.

John Calverley, Esq., of Oulton Hall, near Leeds, expired on Friday week, after a very short illness. The remains of the deceased gentleman were interred yesterday at Oulton Church. The proceedings were of a strictly private character.

Mr. Calverley was the direct representative in the male line of the ancient house of Calverley of Calverley, near Leeds. The senior branch is represented in the female line only by Sir Walter Calverley Trevelyan, Bart., of Nettlecomb Court, Somersetshire.

Deceased married, in 1822, Ellen Watson, daughter of Thomas Molyneux, Esq ,of Newsham House, Lancashire, and leaves an only son, Edmund, married in 1852 to Isabella Mary, elder daughter of Sir John Thomas Selwin, Bart:, of Down Hall, Essex, and formerly of Denton Park, near Otley, and two daughters, of whom the elder is married to her cousin, Charles Stuart Calverley, Esq., of the Inner Temple. Mr. Calverley was, for upwards of fifty years, a magistrate and deputy-lieutenant for the West Riding, but during the later years of his life he retired from taking any active part in magisterial business.

He discharged the duties of his position as a country gentleman so as to command the respect and attachment of all. He was not only a liberal benefactor to the poor on his estate, but invariably joined in any charitable effort and public subscription in the neighbourhood.

He was an attached member of the Church of England, and in 1827 carried out his father’s intentions by erecting the beautiful church at Oulton. In politics he was a Conservative of moderate views. Although naturally of retiring manners, and avoiding any public display, there are few persons whose loss will be more sincerely and deservedly regretted both on public and private grounds.