Claude and Mary Fulton ran the post office at 34 Church Street in Woodlesford from 1946. It had previously been in the hands of Harry and Dellah Walker who came originally from Methley.

Claude Fulton’s main job was as a carpet salesman commuting by train from Woodlesford to Matthias Robinson’s showroom on King Edward Street in the centre of Leeds. It was his wife looked after the post office which also stocked a range of goods which she bought from a wholesaler in Leeds.

The couple were married at Pocklington in 1934 and had two children, Patrick born in 1937, and Janet, who was four years old when she came to Woodlesford. During the war the family had lived at Bingley and at Kendal in the Lake District. Claude grew up in York where his Irish born father was an attendant at The Retreat, a mental asylum established by Quakers. Mary was the daughter of a railway signal man from the East Riding.

Claude was a keen amateur photographer and an original member of the Oulton with Woodlesford Dramatic Society which he helped found in 1950.

Mary ran the post office and shop for over 20 years with many of her customers buying “on tick” and paying their bills when they got their wages at the end of the week. She gave it up about a year after both her husband and son, who had been in the Royal Air Force, died within a few months of each other in 1965. Soon after a road widening scheme led to the post office’s compulsory purchase and demolition along with other houses between it and the junction of Oulton Lane. The land on which they stood is now called Woodlesford Green.

On 26 November 1952 tragedy struck the community when three people at 36 Church Street, between the post office and the White Hart, were killed by a gas leak while they were asleep. Tom and Lily Ellis, who were in their seventies, were looking after their seven year old granddaughter, Lorraine Hull. 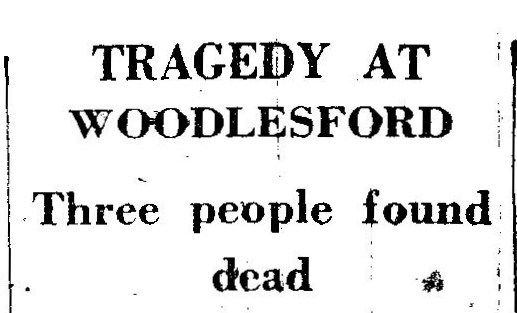 Their deaths were discovered by Lorainne’s aunt, Mary Benson. She couldn’t get a response when she arrived from Green Lea at mid-day to find the curtains still drawn and milk and a newspaper on the doorstep. After alerting her sister-in-law, Mary Ellis, who lived nearby, they broke a window and went into the house to find all three victims dead in their beds.

One of the first on the scene to help was the Vicar of Woodlesford, Dan Ivor James. 300 people attended the funerals he conducted the following Monday, and many villagers followed the cortege past the house to the cemetery at Rothwell Haigh. “It was one of the most moving scenes witnessed by local people,” reported the Wakefield Express.

At the inquest, held at the Midland Hotel, the coroner said that it was one of the most tragic things he had inquired into during his career. The jury returned a verdict of “Misadventure”.

Mary’s husband, Leonard Ellis, told them that the house was “all electric” and there was no gas supply to the house with all the pipes having been removed. The night before the tragedy he had discussed with his mother an “unusual smell” which had been present for a long time and which they thought was coming from the empty house next door.

Lorraine’s father, foundry furnaceman George William Hull, from Claremont Street, said that his father-in-law had reported a gas leak to the gas offices in Rothwell two months previously. He said workmen had done some excavating but the smell of gas remained after they had been.

Police constable Alan Grimley said that when he arrived the house was “full of gas.” The pathologist concluded the deaths were from coal gas poisoning, probably in the early hours of the morning.

An engineer from the North Eastern Gas Board said workmen had cut off the supply at the mains in October but the leak that caused the deaths came from a recently fractured pipe. Gas had percolated into the empty property and then into the Ellis’s house, probably because of not been able to escape through frozen ground, he said.

The coroner said there was no evidence of criminal negligence. In the House of Commons the following February local M.P. Albert Roberts asked questions about the poisonous effects of carbon monoxide and why the gas wasn’t made with a stronger smell.

Click on the link below to listen to Janet Fulton, who married Leeds born Water Haigh fitter Jim Grimes, remembering her childhood at Woodlesford post office and the tragedy which struck next door.

In 1952 Sheila Duffield moved from Castleford to live with her family in a new council house on All Saints Circle. She married Patrick Fulton in 1960 and travelled to live in Germany with him whilst he was in the R.A.F. They had two children and moved back to live with his parents in 1963 where she helped her mother-in-law do the post office books and run the shop.

After her husband and father-in-law died Sheila moved to a new house on Holmsley Lane and in 1968 married Douglas Mcquade, an accountant at the Yorkshire Copper Works. Just before her second wedding she discovered that her great aunt, Rose Yelland, had been a maid at the post office before the Second World War and had lived in the same room where Claude Fulton processed his films.

Click on the link below for Sheila’s memories of Woodlesford in the middle years of the 1960s.

The bell over the door