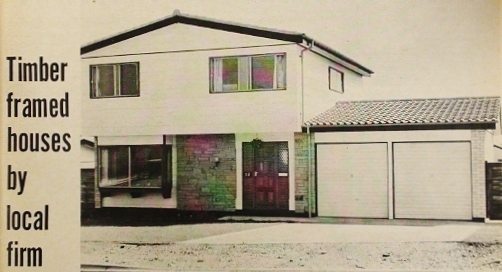 Through their construction of hundreds of homes the Appleyard family building firm had a major impact on the villages of Oulton, Woodlesford and the wider Rothwell district. In the 1960s they pioneered the technique of building timber framed houses in the area, a method they imported from North America and Scandanavia, and they were largely responsible for the estates at Beechwood, Northwood Falls, Parkways and New Farmer’s Hill.

The firm was started by Ernest Appleyard who was born in Kippax in 1908. After working as a colliery bricklayer he started building houses “on spec” in Rothwell in the 1930s and eventually built himself a family house on Holmsley Lane in Woodlesford next to the old Needless Inn.

After the Second World War the firm benefited from contracts to build houses for Rothwell Urban District Council and Ernest’s eldest sons Kenneth and Leslie joined the business. Les trained at the School of Architecture at Leeds College of Art and convinced his father of the benefits of the timber framed design.

Although more expensive in terms of materials the houses could be built more quickly than those using traditional breeze blocks or bricks for internal walls. They were better insulated and cheaper to heat. The firm also built the Beechwood shopping centre where estate agents and surveyors V. Stanley Walker sold the new properties.

As they grew E. Appleyard Ltd opened a factory at Whitwood near Castleford to fabricate panels for their houses. After their success locally they expanded in the 1970s to build estates in Scotland and Germany eventually trading as Appleyard Arbor, with Ernest moving on to acquire a builders merchants business in Leeds.

Click on the links below to hear Les Appleyard tell the story of his boyhood in Woodlesford and how he helped to introduce new building techniques into the district.

Les Appleyard – Growing up in Woodlesford