William Bell Williams was commonly known as just “Billy” Williams and was one of Water Haigh’s most well known personalities. He was born in Normanton in 1904 and followed his father Frank down the pit when he was just 13 years old in 1917.

Frank Williams had come from Monmouthshire, moving in 1900 to work first at Briggs’ Don Pedro pit near Normanton. He later went to Water Haigh shortly after the pit started producing coal in 1911, and rose to become an undermanager.

Billy climbed the ranks too overtaking his father to be the manager from 1940 to 1958, taking the pit through the transition in 1947 from the private ownership of Henry Briggs & Company to the public ownership of the National Coal Board.

For many years he lived with his family at Eshald House which had been bought by the Briggs company and divided into three apartments.

He was highly regarded as a “firm but fair” boss and evidence in the minutes of pit consultative committee meetings shows that he was as understanding of his workforce’s welfare as he was of production and profits for the shareholders or the country. In October 1956, along with a Polish miner called Waclow Chrystyn, Billy was awarded the George Medal for a rescue attempt underground the previous February in which two men were buried under a roof fall.

Click on the links below to hear Joan Williams, who married Billy’s son Robin when she was a teacher at Woodlesford school in the 1950s. There are also tales from Fred Lunn who started at Water Haigh in 1958 shortly before Billy was promoted to a more senior job in the No 8 Area of the North Yorkshire coal field. After his retirement Billy became a Conservative councillor for the Rothwell Urban District Council. 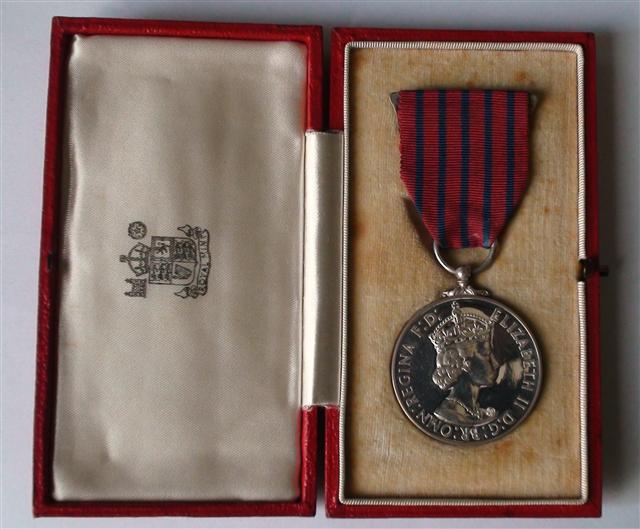 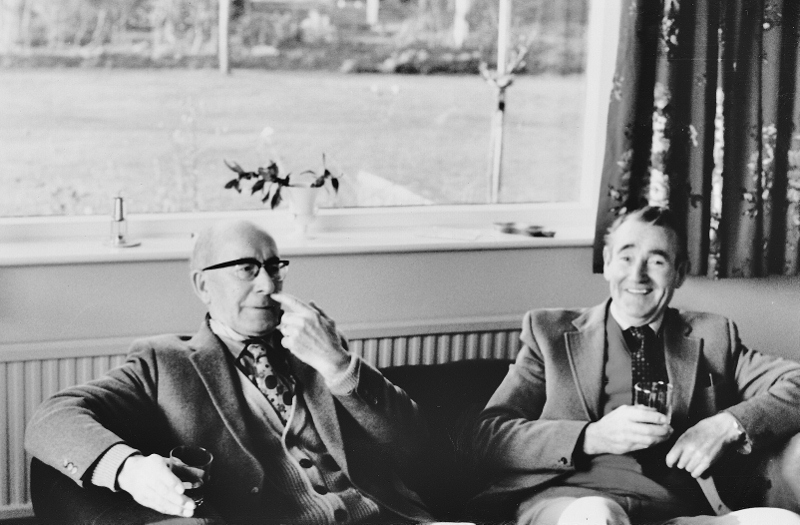 A glass of the hard stuff. Billy Williams and Water Haigh miner Pat Kilgallon enjoy a drink together at Billy’s bungalow off Farrer Lane.

During the last 29 years, whenever a call for assistance has been made to the Central Mines Rescue Station at Wakefield, Mr. William Riley, the superintendent, has led his men into action. In 38 years of rescue work he has missed only one call, and that due to illness.

Mr. Riley is one of the pioneers of his work. As an official of a Staffordshire colliery, he took part in the rescue work at the serious disasters which occurred in the years 1908 to 1910 and which resulted in the establishment of a central rescue team in each coalfield being made compulsory.

After a period in the Mining Department at Birmingham University, Mr. Riley started in the Warwickshire coalfield, and then moved to stations in Somerset and South Wales before becoming superintendent of the Wakefield station 29 years ago.

The incident he recalls most vividly is a rescue from the old Soothill pit in the Batley area. “When we reached the colliery one shaft was on fire and smoke was coming up the other. We went down, wearing our breathing apparatus, and at the bottom of the shaft  found the smoke particularly dense. After going through this for some distance, we noticed a barrier of sheets and jackets. On pulling these aside, we saw seven men and two boys. They had tried to reach the bottom of the shaft, but, having beaten back by the smoke, they barricaded themselves in a stable. It was fortunate we noticed them.”

“We revived them with oxygen, and the first words of one of the boys, whose arms had been found clasped round his pal, were: “Never mind me, mister, look after Joe!”

A memorable experience was at the South Kirkby Colliery explosion 1935 when 10 men lost their lives, including the second officer at the rescue station, Mr. Frank Dale. Mr. Dale was in charge of the work of sealing off a fire in the pit when the explosion occurred. He was killed, and five other members of the permanent brigade at Wakefield, including Mr. Riley’s son, were severely burned and taken to hospital.

Afterwards, one of the rescue men, Charles Ball, could not be found. It was assumed he must still be in the pit, and Mr. Riley made another descent in charge of two more teams. They found Ball badly burned a mile and three-quarters from the shaft.

The rescue man’s greatest safeguard in his dangerous job is the bird he takes down the pit with him to give warning of the presence of poisonous fumes. In the Wakefield rescue station, there are aviaries containing 32 of these birds, and the oldest of them is not the more common canary but a goldfinch. After about 11 years of active service, this 13-year-old veteran has earned honourable retirement.

The popularity of canaries for this work is due partly their light colouring, which makes their reactions easily noticeable in the pit, but in addition goldfinches, linnets and redpoles also have been found reliable gas detectors.

The permanent brigade at the Wakefield station consists of eight men, and Mr. Riley can call on the services of 164 volunteers in collieries throughout the West Yorkshire coalfield. Rescue men are trained at the station in an underground replica of colliery workings in conditions as near to those they may encounter as it has been possible to contrive.

A new addition to the equipment these men will carry in the future will be morphia. They are being trained in its use, and will be able to give immediate relief to anyone severely injured.