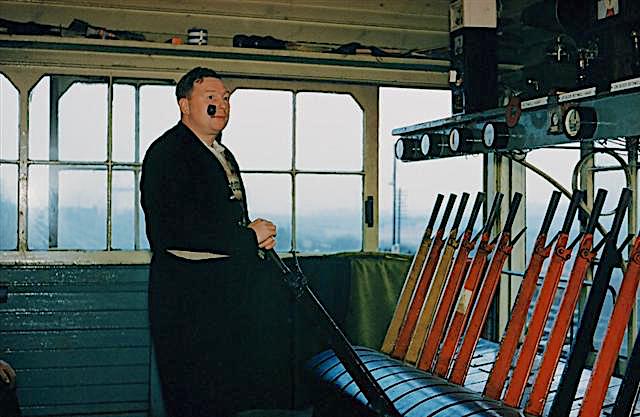 Bill Tiffany was a signalman at Waterloo Colliery Sidings, the next signal box after Woodlesford on the way to Leeds. He was born in 1919, the youngest son of life insurance agent Albert Tiffany and Anne Elizabeth Abbishaw who had married at Rothwell in 1907.

Bill served in the Royal Navy during World War Two before starting as a signalman at Altofts and Methley Junction. In August 1944, at Oulton church, he married Gladys Clapham, the only child of Bentley’s brewery labourer, Bill Clapham. The wedding reception was held at the Cooperative Wholesale Society’s cafe in Leeds and they lived in a house on Claremont Street.

The signal box Bill worked in, on the Down side of the line, was installed in 1900. Also at Waterloo the four running lines to and from Leeds merged into two before entering the cutting through Woodlesford.

In earlier times Waterloo signal box was on the opposite side of the tracks and controlled sidings for a pit which was situated between the railway and the canal, but when Bill was there the box’s main function was to allow coal trains into the sidings for Skelton Grange power station.

Construction of the “A” power station started in the late 1940s after the nationalised British Electricity Authority had taken over from 22 municipal and privately owned generating companies. It cost 18 million pounds and was capable of delivering 360,000 kilowatts.

Rail access was put in in May 1948 with the foundation stone being laid in October by the Lord Mayor of Leeds, George Brett. A second “B” station was completed in 1962.

As well as the coal arriving via Waterloo Colliery Sidings there was also a rail connection from the nearby Waterloo Main colliery and shipments came in large barges on the Aire and Calder canal, and by road.

On 27 September 1964 there was a major derailment of a train which had just passed through Woodlesford and Waterloo. A milk tank wagon coupled at the front of the night sleeper from London St. Pancras to Edinburgh became derailed at Rothwell Haigh signal box with the whole train crashing into the Wakefield Road bridge at Stourton a couple of minutes later. There were 70 passengers on board but luckily the most serious injury was a broken finger. It’s not known if Bill Tiffany was on duty that night.

A fire in May 1972 destroyed the old Midland Railway signal box. It was replaced with a temporary structure for a few months and a new more modern design was opened in September 1972. It was closed in June 1981. Bill Tiffany retired when he was 61 and died in 1988.

Click on the link below to hear Bill’s widow reminiscing in 2007 about their life together and the holidays they took by train to Scotland and Cornwall.

Click on this link for a plan of the layout at Waterloo in the 1960s. Waterloo Colliery Sidings plan by David Jubb